The foundation of the PSC development model centres around developing technical, tactical and decision making components of the game simultaneously. It employs a movement away from isolated technical football training to coaching cognitive and physical skills in combination is game like training situations.

In its simplest form the game is broken down into four phases from which we can further divide the elements needing to be coached.

Tactical Periodization is a coaching methodology which is used to train football players with respect to the tactical context of the match. It is a hybrid of training techniques and focuses on training no component in isolation. Most coaches divide their tactical periodization training into four parts as show in the diagrams. These four moments are: Offensive Organisation, the Transition from Defence to Attack, Defensive Organisation, and the Transition from Attack to Defense. Through Tactical Periodization, the aim is to develop players to rapidly alter their on-field behaviors according to the tactical context of the match, and what actually unfolds in front of them. In turn, every training exercise focuses on at least one of the four moments, and always the coach’s tactical game model of how he wants his team to play. Coaches may apply to play game style any and/or formation leveraging this method. Implementing a game style requires thinking and planning through each game situation. Preparing those game situations through the pre-season and enhancing the team’s effectiveness throughout the season is the focus of the Tactical Periodization method. It integrates the four pillars of the game (physical, mental, technical, and tactical) with the four moments of the game (Offense, Transition to Defense, Defense, and Transition to Offense) over the training week to reach the desired Game Model.

In its simplest form the game is broken down into four phases from which we can further divide the elements needing to be coached. 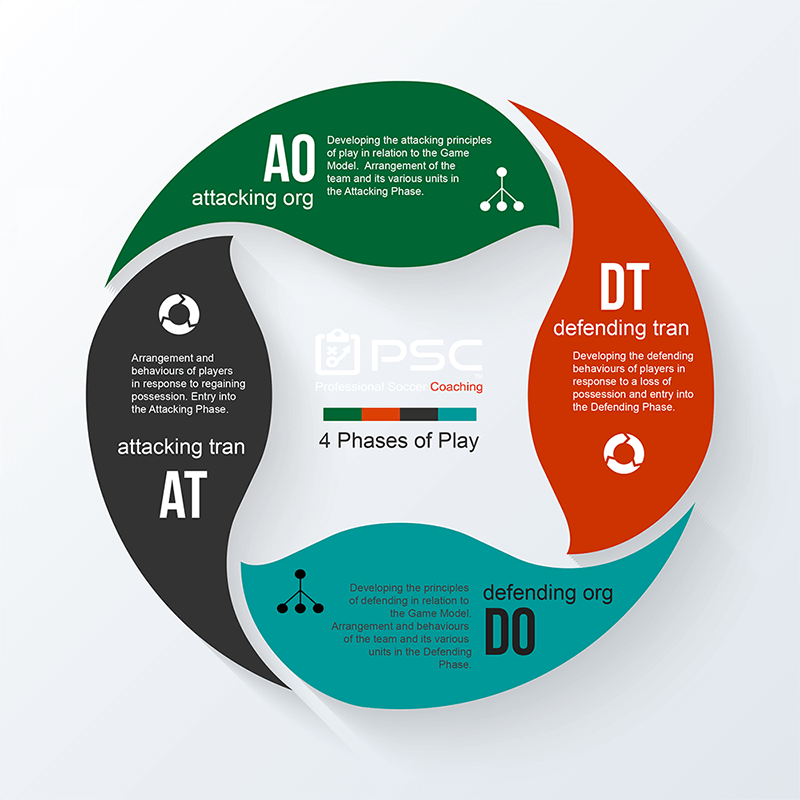 The training model is split into the for models (Attacking Organization, Defending Organization and the transition phases of Attacking Transition and Defending Transition. Click on the specific phase to be directed to training activities and sessions for that phase. Within each of these phases we have underlying models of how we want our team to play in each phase. We then train the group actions we want for out team in specific exercises designed to get players and units of the team to behave in a particular manner, whist simultaneously training/coaching physical, tactical and technical attributes.

Arguably the most important principle of Tactical Periodization, training has to be specific to the game and the desired actions we want players to execute in a game. Specificity arises when there is a permanent relationship between all the dimensions of the game and the training exercises are specifically representative of the game model (style of play). Therefore, the concept of Specificity directs and leads the training process. Part of this involves training in the specific region of the field with the appropriate players and spacing for that scenario.